How to Care for Your Cast Iron Cookware

Did you know that cast iron is the original non-stick cookware? Not only that, but cooking often with cast iron gives you a natural iron supplement – and an upper body workout as well. A chuck wagon-sized skillet can weigh eight pounds or more. And that’s without food in it!

Cast iron cookware has been used for a long time, mainly because it is fairly simple to make. All you need is sand, a pattern, and molten iron. The method is similar to the sand-cast candles that were popular in the 1960s, except for the need to get the iron up to 2,500 degrees!

Very little of the oldest cast iron is still around. In the 18th and 19th centuries the cookware was made thinner, which caused cracking and warping during use. Later pieces, especially those made during the 1930s, were heavier and very well made.

Cast iron cookware comes in many sizes and shapes. The two I’ve found the most useful are the five-quart Dutch oven and the 3-quart combo-cooker. The lid for the Dutch oven has spikes on the underside; they help the condensed steam to drip back into the pan instead of down the outside of the pot. The combo-cooker consists of a three-inch deep skillet with a lid that doubles as a flat skillet.


For single servings, the small 6-inch pan is good to have on hand. It cooks up to three eggs to perfection and is great for small meat loaves and casseroles. It’s useful, too, for sautéing small amounts of mushrooms or onions. 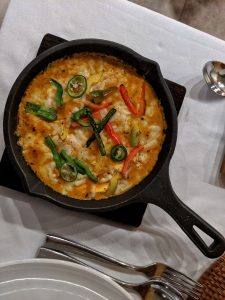 “Seasoning” is the main thing that scares those who are new to cast iron cooking. However, it is easy to do.

First, wash the pan with mild soap and dry it thoroughly. Give it a good greasing with vegetable shortening, inside and out (don’t forget the handle and the inside of the lid), and place it upside down on a foil-lined baking sheet. Put it in a warm oven, 300 to 350 degrees. After about two hours, turn off the oven, leaving the pan in the oven to cool overnight or at least six hours. Take the pan out and wipe off excess grease with a clean rag or a paper towel. That’s it! You now have a seasoned cast iron pan.

Over time, the surface of the pan will become black, shiny, and virtually non-stick. After use, wash the pan with hot water, mild soap and a soft sponge or brush. Some cast iron fans don’t use soap at all because it removes some of the seasoning. Dry thoroughly. I set my pans on the wood stove or in the oven (mine has a pilot light) for a few minutes to make sure they are dry. Don’t ever put your precious cast iron in the dishwasher! I once did that to a friend’s pan. A lovely pan went in; a rusted piece of iron came out. Not knowing at the time how to restore it, I had to buy him a new pan.

When using your cast iron cookware, treat it like any other non-stick pan. Use wooden or nylon utensils and avoid anything that would scratch the seasoned surface. Preheat the pan and keep the heat low; the cast iron holds a nice even heat once it’s warmed up. Don’t store food in the pan, it can give the food a metallic flavor and cause the pan to rust. Cast iron pans should be stored without their lids, or put a layer of newspaper or paper towels between the lid and the pan; that will keep moisture from being trapped in the pan and causing rust.

When your pan is new, it’s a good idea to cook greasy foods, like bacon, in it. That adds to the seasoning. Also, avoid cooking acidic foods, like tomatoes, in new cast iron. However, once the pan is well seasoned, the acid doesn’t harm the surface as much. So, if you cook a lot of tomato-based foods, you will want to use a stainless steel pan instead.

If, in spite of your care, a pan becomes rusty, give it a good scrubbing in hot soapy water. If the rust is really bad you can use steel wool or sandpaper. Then, re-season the pan.

I prepare the following recipe in the large half of the combo-cooker. It’s adapted from one of my favorite cookbooks, the More-with-Less Cookbook by Doris Janzen Longacre.

In the 10- or 12-inch cast iron skillet, brown the beef with the salt and pepper. While it is browning, boil the egg noodles in salted water. Drain the fat off the ground beef and add the onion, celery, tomatoes, and peas. Mix well. Drain the egg noodles and spread over the meat mixture. Sprinkle the cheddar or Parmesan cheese over the noodles.
Simmer uncovered for 15 minutes to blend the flavors. Serve from the skillet.

*Any green vegetable will do, especially leftovers.

The perfect side dish for meat is potatoes. These roasted potatoes are a nice change of pace from mashed or baked potatoes. The following recipe is adapted from The Cast Iron Skillet Cookbook by Sharon Kramis and Julie Kramis Hearne.

Position the rack in the center of the oven and preheat to 400 degrees. Cut each potato into 6 wedges (cut in half, then cut each half into thirds). In a bowl, toss the potatoes with the olive oil and rosemary, coating the potatoes completely. Season to taste with the salt and pepper. Place in a 10- or 12-inch cast iron skillet, and put the skillet in the oven. Roast until crisp and golden, about 30 – 40 minutes.

Beef stew is an all-time favorite at our house. I slow cook it in my Dutch oven.

Pour about 3 tablespoons of oil in the Dutch oven. Slowly heat until a drop of water will sizzle when dropped into the oil. Dredge stew meat in flour, if desired, and brown in the hot oil, turning occasionally. Add the onions and cook until lightly browned. Add celery, carrots, bay leaf, potatoes, and onion soup mix, if desired. Cover with water and bring to a boil. Cover, reduce heat, and simmer for 1-2 hours, or until meat is thoroughly cooked and vegetables are tender. Remove bay leaf. Salt to taste if onion soup mix isn’t used. Gravy can be thickened with corn starch or flour mixed in cold water. Serve with homemade biscuits.