Here we are going to compare Pho Vs Ramen and see if we can pick a winner between these wonderfully flavoured dishes.

If you like noodles or your love for Chinese food is immense, then Pho and Ramen are the best dishes for you. These both are one of the few popular dishes, but can you tell the difference between them as they are similar to each other? These both have ingredients of flavourful broth, noodles, and lots of toppings make the soup all the tastier.

If you are looking to add noodles to your menu, then you should read this for their uniqueness.

This is a Vietnamese noodle which is an herbal broth known as fuh. Pho noodles are soft when you eat, unlike Ramen. The contents of the ingredients include rice noodles, broth and beef, and chicken which is sliced thinly.

Most people usually eat this Vietnam food in the early mornings as their breakfast. It is available in restaurants on the street.

They use different varieties of spices which gives you aromatic flavors which are hard to resist. The spices include cinnamon, star, and peppercorns, where the flavors of broth are cooked perfectly with balanced spices. 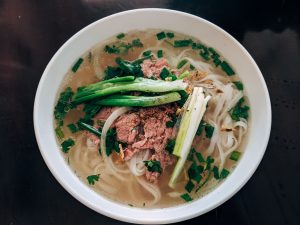 The dish came into existence in the late 10th century of French colonization. It was first introduced to North Vietnam, and then the whole of Vietnam started to acknowledge it in 1954.

The Toppings and Garnishes include:

Ramen is one of the popular dishes present in the world. It’s famous in Asian countries as it originated in Japan. The ingredients include rich bone broth, pork, and wheat noodles. The famous Ramen would be incomplete without a soft-boiled egg with fresh scallions on the toppings.

You can find instant Ramen noodles but making it from scratch just tastes much better. Chicken or Pork can be used in the ingredients while preparing. 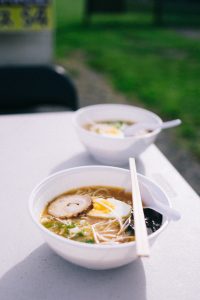 Now that you know the difference between Pho and Ramen, which one is your favorite? Try the different types of both dishes and enjoy the perfect toppings to have a delicious and quick meal. We suggest you grab some of these reusable chopsticks, which are rust and corrosion free, they won’t absorb water